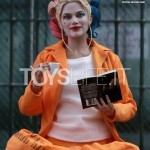 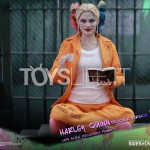 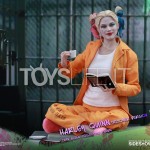 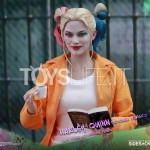 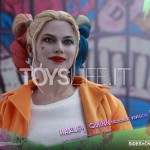 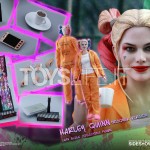 In the DC Extended Universe blockbuster Suicide Squad, Harley Quinn makes her entrance as a convict serving time in the Belle Reve Prison where she is reluctantly enlisted in a secret task force doing dangerous dirty work for the government. Sultry but outright psychotic, the Queen of Gotham City is unmistakably the star in this ragtag team of supervillains, and Sideshow and Hot Toys are excited to introduce an all-new sixth scale collectible figure of Harley Quinn in her prisoner outfit!

Expertly crafted based on Margot Robbie’s appearance as Harley Quinn in the film, this movie-accurate collectible figure features a newly sculpted head, a newly developed specialized body with enhanced leg articulations, finely tailored prisoner costume, a variety of accessories she enjoys as a “privileged” inmate, and a specially designed figure stand with character backdrop and a removable prison cell mattress.

It’s up to you to rescue her from the lockup and bring her home to your Suicide Squad collection!